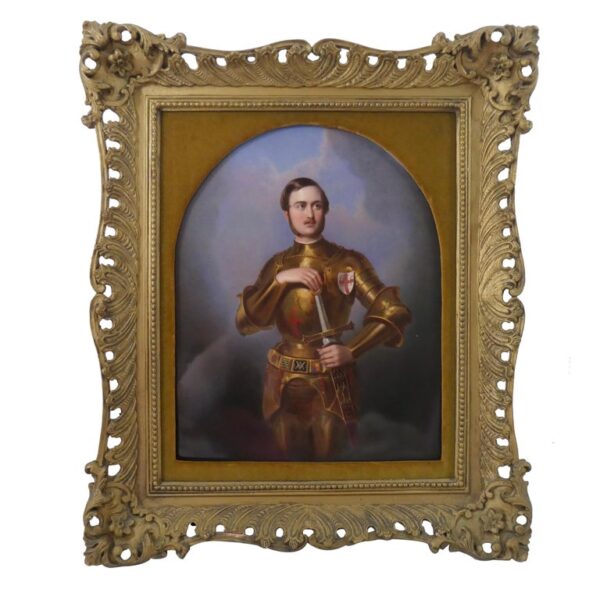 Condition – Perfect. No damage. No restoration.

Edward Henry Corbould’s watercolour and mixed-media posthumous portrait of Prince Albert as a Christian knight formed the centrepiece of an elaborate design for an imaginary altarpiece. It was inscribed (in German) “I have fought a good fight, I have finished my course. Henceforth there is laid up for me a crown of righteousness”. Corbould’s portrait drew closely on an earlier miniature of the Prince by Robert Thorburn (1818-1885) in which Albert’s right hand rests on a knight’s helm. Painted in May 1844, Albert presented it to the Queen on her birthday later the same month. Victoria was overjoyed, writing “I cannot say how beautiful it is, nor how it exactly portrays the dear original”. It remained one of her most treasured mementoes.
A porcelain plaque manufactured by Carl Schmidt, of virtually the same size as the present example, also painted with Corbould’s version of the portrait by Hans Kundmuller (1837-83) was first recorded at Osborne House in 1876, in the Queen’s bedroom (see Royal Collection Trust online RCIN 927595, 421665 and 406321).

Brought to you by WisdmLabs: Expert WooCommerce Developer