The next Fair at which I will be exhibiting, is the Art & Antiques Fair, Olympia, London, Wednesday 22 June - Sunday 26 June 2022. One of the highest quality Antiques Fairs, with knowledgeable dealers displaying a wide selection of antiques and works of art. If you would like complimentary tickets, please contact me. 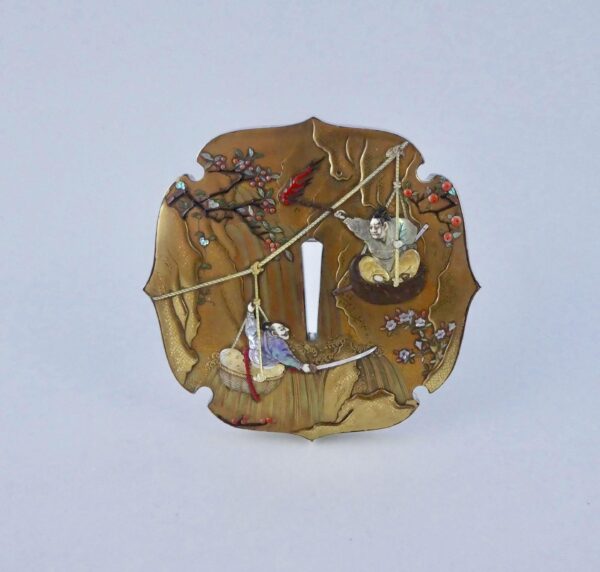 An exceptionally fine and large Japanese gold lacquer and Shibayama inlaid tsuba, Meiji Period. An amusing depiction of two Samurai riding in baskets, suspended from ropes, across a a raging river within a gorge – one wielding a katana, the other a flaming torch. Both Samurai attempting to defeat the other by cutting the rope, unaware that such an action would only succeed in both crashing into the river below.
The reverse decorated with a bird in flight amongst Peony, Wisteria and other plants. Within a silver mount.
Signed – Shinzan on a red lacquer plaque.

Condition – Typical minute, age related gaps and lacquer cracks are evident where the movement of the lacquer upon wood meets the solid Silver rims, however the item is totally stable and in excellent condition.

Items of this type were the result of a collaboration of exceptional craftsmen working in Japan towards the end of the 19th century, primarily for the emerging Western market. The process would have involved a lacquer specialist, a metalworker and a Shibayama artist. Production of such items took a considerable amount of time, and consequently, were highly prized acquisitions.

Brought to you by WisdmLabs: Expert WooCommerce Developer